Blue Periods: On Aging and Writing 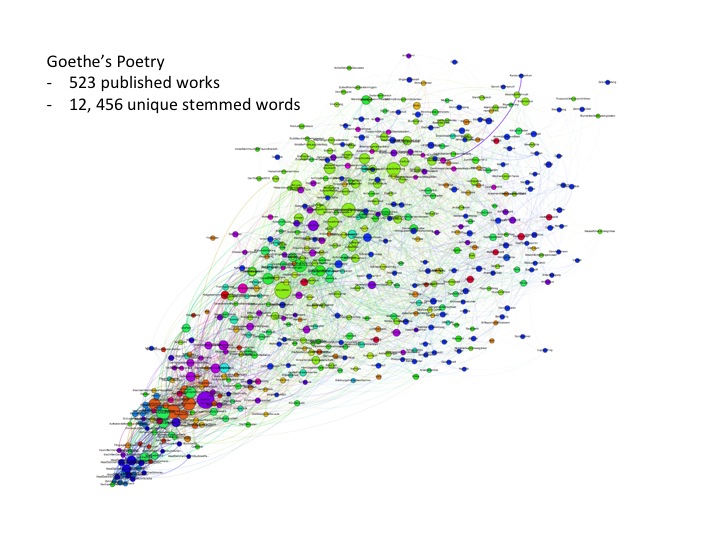 As a follow-up to my last post on Whitman, I wanted to explore more examples of how writing develops over the course of a poet’s career. As I wrote there, I’m interested in using network theory to better understand how a poet’s career might have a particular shape or orientation, indeed, how one might visualize the “career” itself. What are the connections between the highly local creative process of writing poems and a larger sense of the whole, of how one’s writing and a sense of one’s life line up?

If Whitman gives us one idea to work with — that the arc of the poetic corpus is towards consolidation, consensus, and compaction — I want to explore two other writers here, the Romantic poets J.W. Goethe and William Wordsworth. The point is not simply to find different types of careers, but also to understand how the patterns and groupings within a corpus work over time. To borrow Ted Underwood’s expression, not just how literary periods matter, but how periods within a person’s life matter, too.

The first example is the career of J.W. Goethe. Below you can see network graphs of his published poetry (I’ll return to the distinction about publication later). There is the full graph followed by his poetry broken down into the traditional three-part period scheme usually used to understand his career (early, middle, late). In addition, I’m including the measures used to calculate differences between the different period networks.

The two salient points that these graphs illustrate are the formal expansions of the late period – the generic entropy, the greater irregularity of distances between works, the increasing diameter – but also just how compact the so-called classical or middle period is. There is a tremendous formal consolidation that occurs during this phase of Goethe’s career that makes the late opening out all the more emphatic. The number of closed loops decrease by close to 30%, the variance of distances between works increases by 50%, the avg distance doubles, and the diameter is 2.5 times as wide. (It should be added that the avg. distance that matches the early period is very significant given the greater number of poems and thus the greater linguistic horizon that the late poems can connect with. The similarity of distance given the overall greater availability of language suggests a profound commitment to diversity.)

These points get even more interesting if we explore the periods as a longer horizon of time. What you see below is a graph of the distances in vocabulary between the poems for every connected pair of poems in the network. On one level, it reiterates the insight about that classical consolidation in the middle of Goethe’s career, the point at which we might say in more colloquial terms he has found his “voice.” (It’s the sag around poem 200.) 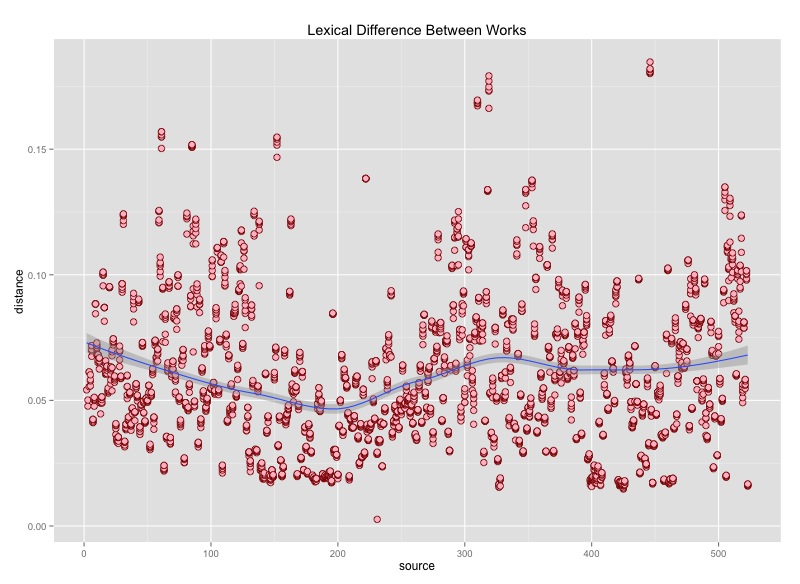 But actually, what seems most interesting to me about this graph are those spikes before the dips. In fact they often coincide with the *beginnings* of the different periods in Goethe’s life. If we plot it by differentiating between the three periods, we can see how each period is marked by an opening spike followed by a dip. In other words, one way to think about “periods” in a poet’s work are as moments of increased experimentation followed-by lexical consolidation. This might give us one way of thinking about what we mean by “period” — not as something internally coherent, but quite the opposite, as that which is marked by a distinct rise and fall of dissimilarity. The truly interesting insight here is the way it appears that towards the end of Goethe’s life he was working his way towards a new period as we see that distinct uptick of vocabulary change when he is in his late 70s. Faustian striving indeed.

So what we have so far are two different examples of how poet’s imagined their careers – Whitman moving ever more in the direction of closure and compaction, Goethe moving in the direction of expansion, one spiraling out, the other in. Wordsworth will give us a third model to work with, but for that I’ll create a separate post.