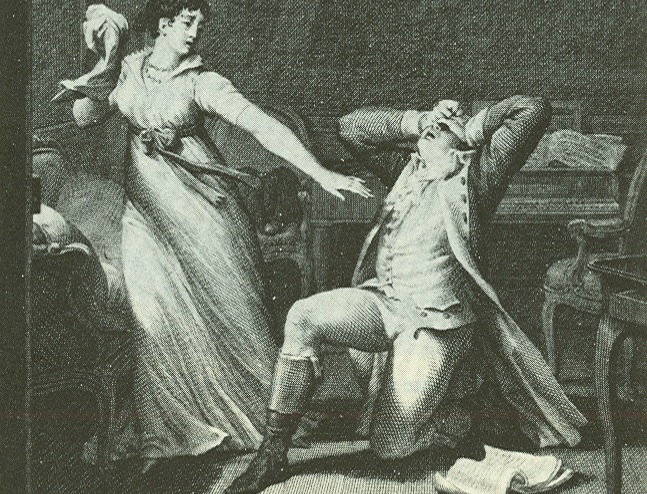 Incidentally, as I’ve repeatedly said, I have only ever reread that book once since its initial appearance and have protected myself from ever doing it again. Those are some serious fireworks! Its uncanny for me and I am afraid of reexperiencing the pathological state from which it emerged.

Our current project seeks to develop new ways of understanding the relationship between the novel and eighteenth-century writing by focusing on one of the most popular novels of the period, Goethe’s Die Leiden des jungen Werthers [The Sorrows of Young Werther] (1774/1787).  With the steep rise of printed writing in the eighteenth century, epistolary novels like Goethe’s Werther, Richardson’s Pamela, or Rousseau’s Julie became landmarks of the new vibrancy of the publishing industry.  They were some of the most persuasive signs of an emerging commercial literary modernity.[i]  As a fictional network of texts, the epistolary novel came to stand for a new culture of literary connectivity.

There has been a good deal of bibliographic research on the nature of such publishing events, enumerative accounts of the host of adaptations that arose from these singularly productive works.[ii]  At the same time, there are a number of studies that engage at a more intimate interpretive level with particular adaptations or particular categories of adaptations, although in the case of Werther such studies are fewer than one might think.[iii]  These studies have much to tell us about some of the aspects of Werther that were of interest to some eighteenth-century readers and writers.  But if Werther was indeed a “syndrome,” in Klaus Scherpe’s words, of eighteenth-century bourgeois society, we want to know more about the reach of the text’s pathos.  How far did a work like Werther penetrate into the published writing of the period?  How much of an “effect” did it have beyond the works that were nominally indebted to it? Where did Werther go and what did it do?

To that end we have over the past year begun creating topological models for visualizing the lexical relationality among literary works.[iv]  We’re interested in the extent to which the language of a particular category – in this case the novel Werther – circulates within a given corpus and structures a given literary field.  Rather than look at only those works that claim to be Wertherian, we are interested in mapping Werther’s discursive presence in a more diffuse, less explicit sense.  If Werther was, as Robyn Schiffman has recently provocatively claimed, a broken epistolary novel,[v] we are interested in how it motivates an alternative understanding of circulation beyond the more linear epistolary model of sender and receiver.[vi]  The value of topology, we want to argue, is the way it allows us to rethink our inherited critical models of literary circulation, from the bibliographically-inflected notion of the “social text” of D.F. McKenzie or Jerome McGann to the poststructurally inspired idea of intertextuality from Genette, Kristeva or even Harold Bloom.[vii]  Instead of understanding literary relationality according to more straightforward bibliographic categories such as titles or adaptations or more immediate lexical categories such as keywords, motifs, or even citations, topology attempts to conceptualize – and visualize – relationality as a function of a more diffuse lexical coordination.  Topology helps us see how groups of words recur over time according to complex patterns, the way they form, in Foucault’s words, “fields of regularity.”[viii]

Instead of the binary on/off of the keyword, title, or citation, that something either is or is not Wertherian (or in Bloom’s case Wertherian by negation), topologies create ways of visualizing a more latent sense of one text’s presence in another, not just as more or less present – a question of succession – but also present in this or that way – as a question of differentiation.  Topology allows us to track the different ways that a particular lexical category, in this case Werther, circulates through the writing of a particular period. According to topological thinking, there is not a singularity out there called Werther, but rather different kinds of Wertherisms allow different kinds of new literary arguments to take shape.[ix] Indeed, this is how we want to understand the “Werther Effect” – that it marks the transformation of literary discourse into multiple, heterogenous and yet mutually constitutive entities.  Werther instantiates, we will be arguing, a new kind of circulation, one that diverges from the two reigning models of the period – from the horizontal linearity of a newly available epistolary culture or the vertical linearity of a genealogically inflected theory of textual inheritance. Instead, the Werther Effect corresponds to a newfound sense of spatial dispersion and literary dimensionality.

If we are in one sense looking for a more latent sense of textual presence in the eighteenth century, we are, in another sense, attempting to understand the meaning of such presence as presence.  As with all hermeneutic practices, topology is deeply attentive to the language of texts, to the “words themselves.”  But unlike more traditional hermeneutic work, whose success lies in a kind of divinatory act of identifying a meaning that is not immediately there – a beyond of language – topology attends to the recurrence of words, the way language repeats itself at a distance (a different kind of thinking about the beyond).  Instead of understanding language in significatory terms (what it says), topology allows us to think more about language in agential terms (what it does).  It shows us how the patterns of lexical repetition within texts produce meanings that are not localized in, or inherent to, those patterns.  Meaning is not a function of signification in a topology, but organization.[x]  In so doing, topology brings to light what we might call the latency of the lexically manifest, the meaning of the distributed recurrences of language that otherwise escape our critical consciousness.  Topology enables a deep engagement with the redundancy of reading.[xi]

This essay is the first in a series that will explore the Werther Effect in the long eighteenth century – where it goes, what it does, and where it comes from.  In this particular essay, we will focus on Werther’s diffusion within Goethe’s own corpus, as the most local level for accounting for the Werther Effect.  Goethe famously said that he only ever read Werther once more in his life after writing it (see the quotation in our epigraph).  We are interested in testing this claim, to take literally Goethe’s understanding of the Unheimlichkeit of Wertherwithin his corpus.  In what ways is Goethe’s body of writing uncannily Wertherian?  And how might Wertherness come to stand for a new theory of the uncanniness of discourse itself?

[iv] We feel it is important to address the collaborative nature of this project as it bears on questions of credit and the division of labor in the digital humanities. While the invention, design, and creation of the topological models used for this essay belong to Mark Algee-Hewitt; and while the readings and interpretations generated by the maps belong to Andrew Piper; given the many, many hours of discussion between ourselves that has gone into the creation, refinement, and interpretation of the model (by no means complete), it is impossible to separate intellectual ownership in such straightforward terms. We are both deeply indebted to each other for inspiration and want to emphasize the truly collaborative nature of this research project. It is not strictly divided between a technical and a humanistic operator; rather the two ways of thinking are deeply interwoven here.

[ix] An important aspect of the “Werther Effect” is the way Werther is himself already an “effect” – an outcome of a new kind of reading culture. The question for our larger project is how we might measure the Werther Effect in these terms – how the novel is both generative of new literary forms and generated by prior ones. Is the Werther Effect a measure of a something deeply novel called Werther or is it more of a reverberation of a prior set of literary and linguistic effects? For a discussion of the changing nature of literary reception during this period, see Hans Vaget’s emphasis on “Werther als Leser,” in Goethes Erzählwerk: Interpretationen, ed. Paul Michael Lützeler und James E. McLeod (Stuttgart: Reclam, 1984), 37-72 and more recently, Katja Mellmann, “Das Buch als Freund – Der Freund als Zeugnis: Zur Entstehung eines neuen Paradigmas für Literaturrezeption und persönliche Beziehungen, mit einer Hypothese zur Erstrezeption von Goethes ‘Werther,’” Bürgerlichkeit im 18. Jahrhundert, ed. Hans Edwin Friedrich et al. (Tübingen: Max Niemyer, 2006), 201-240.

[x] The connection to thinking about language genetically here, as a form of code or instructions, should be explicit. One of the crucial sources for topological thinking derives from the related field of bioinformatics where a four-letter code is understood in instructional terms.  Repetition in an organic setting is the condition of producing enormous degrees of variation. As the idea of life is increasingly understood in textual terms, it warrants thinking how knowledge of organic textual processes can be brought to bear on the understanding of the history of cultural textuality and in addition how models of cultural textuality might generate insights into organic processes.