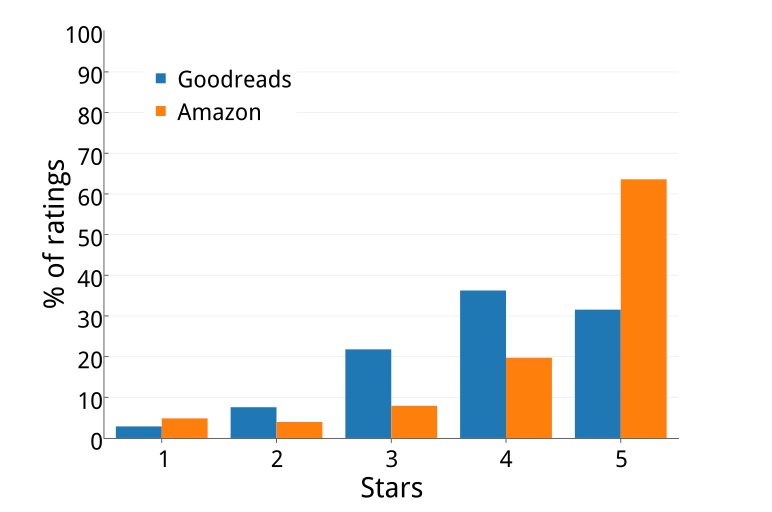 What difference does book-selling make for book reviews? This is the topic of our new paper accepted at the International Conference on Web and Social Media 2015 (ICWSM) that I have co-authored with Stefan Dimitrov and Derek Ruths of the Network Dynamics Lab here at McGill. Looking at 2.5 million reviews from the two platforms, we are interested in learning more about how a particular platform impacts users’ behaviour when it comes to writing about books.

Some of the salient findings:

You can read the full paper here.

This is an initial study aimed at getting some preliminary understanding of whether and how the platforms differ in the ways readers talk about books. We chose to focus on a single genre of “biography,” both to constrain our problem (it still yielded 21,394 books and 2.5 million reviews) and also because biography is a very coherent genre. The issue of genre labelling is one of our next steps — how do users label books and how much coherence is there between reviews and “genres”?

We’re also hoping in the next iterations to get a fuller understanding of the stylistic and discursive ways these platforms differ. Yes, one is clearly more overtly about purchasing while the other isn’t, but how else does commercialization impact reviewing? We suspect that Amazon reviews may in fact carry more information about books, while Goodreads reflects community perspectives, though this is something we are still working on. So far we don’t see much difference in the sentiment expressed on either platform. Neither one seems to express more sentimental strength than the other and neither platform seems to use particular parts of speech that go with such expressive features (like adjectives and adverbs) in significantly higher amounts.

While the results are still coming in, my initial reaction is one of surprise. I think I had a bias that the community platform would be this book-talk utopia and the commercial one would be, well, too mercantilist. I’m not sure that’s an adequate reflection of the two sites broadly speaking. It may just be that the commercial platform supports as much “in-depth” discussion as the community-driven one, if not more so. For those wanting to connect with other users, Goodreads is a better service, but for those wanting to learn about a book, the e-commerce site might be the better bet. Amazon, of course, also lets you purchase the books in question through them directly. Those wanting to build their book collection may want to check out Raise for discounts on the site so that they can shop on Amazon without being afraid of breaking the bank. Who doesn’t love a saving, especially when it comes to books?