The great ________ novel: How scholars classify the novel 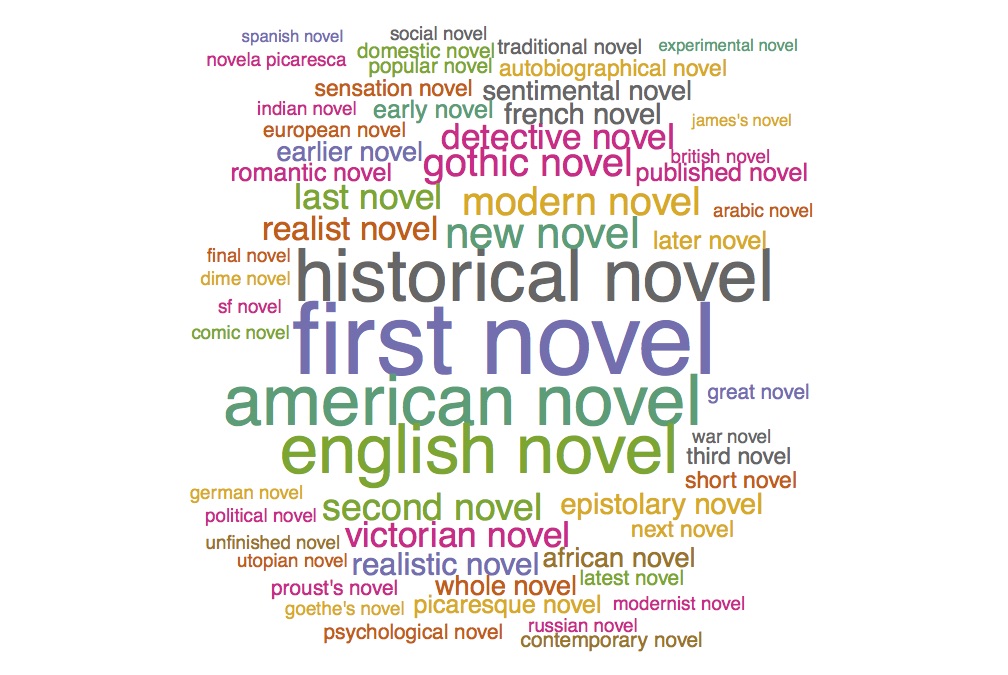 Ever since Fotis Jannidis posted a graph on novel classification a few years ago I have been inspired to do something similar in English. What are the ways in which scholars over the past half-century have classified “the novel”? Using a collection of over 60,000 articles published in JSTOR, I now have a decent representation of an answer. I say decent because it is only based on articles and not all articles from the field. It remains to be seen if different or more data would generate substantially different insights.

What you see is a word cloud of bigrams that have the structure “_____ novel” sized for their overall frequency in the corpus and coloured by the type of phrase (whether it represents a genre, a biographical, historical or textual form of classification).

The most interesting thing is the way biography trumps genre: the single most invoked class of the novel isn’t a genre at all but an event in the author’s life: “first novel.” This term appears just under four-times more often than “last novel,” and 3.4 times more often than “second novel” (pretty surprised by that one, second?). A “new novel” is also quite common, more so than “modern novel” but about half as frequent as national labels like the “American” or “English” novel.

So biography appears to be the most common way to organize and think about the novel, followed by nation (or two anglophone nations, goodbye comp lit)…and then genre (gothic, detective, realist, historical, etc). The historical novel is invoked twice as often as the next most frequent genre, which is the gothic novel, followed by detective, realist, epistolary, sentimental, picaresque, and autobiographical. SF novel and experimental novel are the least invoked.

I think the biographical and national biases of novel classification are interesting and perhaps surprising (though I’m sure someone will say they already knew this). I think lists like this can also help us see where there is concentration in the field (historical novels are way more discussed than other genres as genres) as well as absence. The top names are familiar, but they also point to kinds of novels that we are not talking about in significant numbers. The conversional novel anyone?

Mainly though, I find it’s just nice to know these things.