On Prestige Bias in the Chronicle of Higher Ed 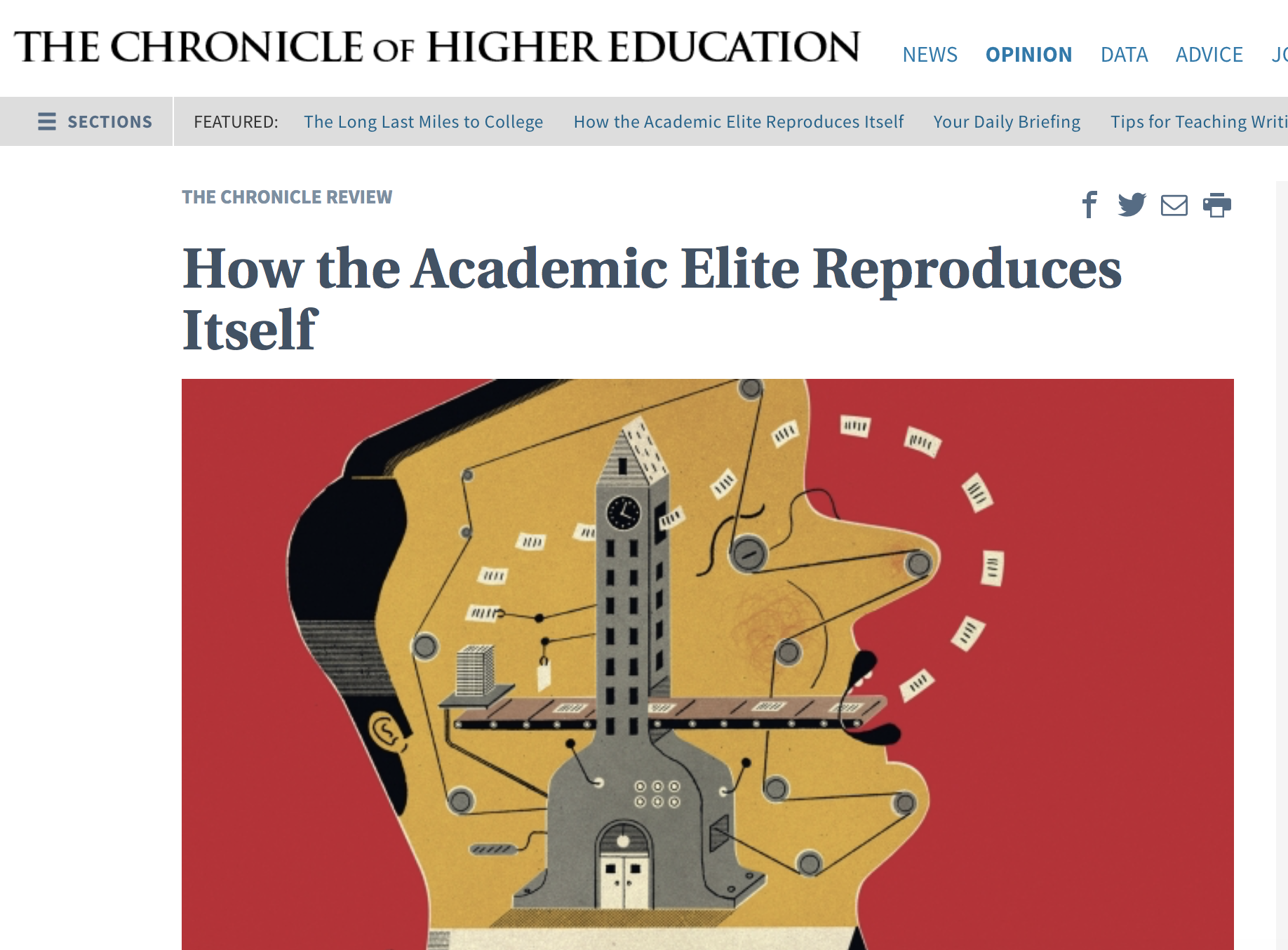 The Chronicle of Higher Education ran a version of our essay on the concentration of institutional prestige as its cover story this week. In it we expand our reflections about how to change the current system. The essay is based on our original piece that appeared in Critical Inquiry. Here is an excerpt from the new essay:

The current system of double-blind peer review that underlies most academic publications is essentially an invention of the second half of the 20th century. Its failings have been well documented and numerous projects in the sciences as well as the humanities are now underway to change it. Almost all of these fixes, however, continue to rely on two basic principles: First, that communities of scholars still make intuitive judgments about quality (judgments which are rarely, if ever, made explicit); and second, that they largely rely on established publishing practices that essentially transfer content from one place (the lab or the desk) to another (the library).

What we are imagining, by contrast, is a new form of algorithmic openness, in which computation is used not as an afterthought or means of searching for things that have already been selected and sorted, but instead as a form of forethought, as a means of generating more diverse ecosystems of knowledge. What values do we care about in terms of human knowledge and how can we use the tools of data science to capture and more adequately represent those values in our system of scholarly communication? Instead of subject indexes and citation rankings, imagine filtering by institutional diversity, citational novelty, matters of public concern, or any number of other priorities. How might we encode these values to create smarter, more adaptable, and more open platforms and practices?

It is clear from our study and others like it that elite institutions continue to be the locus of the practices, techniques, virtues, and values that have come to define modern academic knowledge. They diffuse it, whether in the form of academic labor (personnel) or ideas (publication), from a concentrated center to a broader periphery. Using digital technologies to guide the circulation of knowledge does not inherently make one complicit in the “neoliberalization and corporatization” of higher education or a practitioner of “weapons of math destruction,” to use the data scientist Cathy O’Neil’s well-turned phrase. Wisely and openly used, such technologies can help us not only reveal, but potentially undo, longstanding disparities of institutional concentration. It is time we built a scholarly infrastructure that is more inclusive and more responsive to a broader range of voices, including those outside of the academy.

Over the course of the 19th century, universities adopted many of the norms of print culture and in so doing transformed themselves into modern research universities. We need a similar reinvention for our own universities as they enter a new age.

Addressing epistemic inequality, and not simply publication inequities, will require us to rethink what universities do and what they are for in a digital age. “Digitization” means more than just transferring print practices to digital formats. We need to integrate data science, knowledge of our past practices, and contemporary understandings of institutional norms to reinvigorate the intellectual openness of the university. We need to use all of our analytical and interpretive capabilities to rethink who and what counts. The university is a technology. Let’s treat it like one.