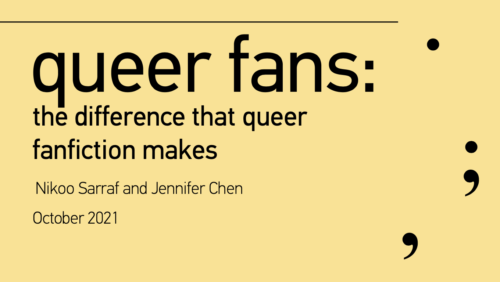 Two students in our lab, Nikoo Sarraf and Jennifer Chen, have a new lab collaboration paper out that explores the way queer fanfiction differs from mainstream publishing. As they write in their introduction:

Fanfiction is a powerful and transformative form of writing that provides a safe space for youth to explore their gender and sexuality, knowing that they are part of a larger community. Recently, researchers have discovered that fanfiction is useful to sexual and gender minority youth (SGMYs) by providing a sense of belonging, helping young readers come to terms with their own sexuality, and exposing them to a community where they are able to explore their identities. As one survey respondent reported, “Without fandom, I wouldn’t have found who I was.”

Their goal was to curate a collection of fanfics that had been tagged as queer on the platform Archive of Our Own and do a range of stylistic computational analysis to better understand potential ways that the style and content of queer fanfics may be contributing to this sense of identity formation expressed by SGMYs interested in fandoms.

Based on a collection of roughly 13,000 fics and several hundred novels, their work is important, first, because it attempts to push against the critical stance that fanfic is somehow inferior to mainstream published work that comes out of publishing houses. By better understanding fanfic’s stylistic differences in an empirical way, we can begin to better understand its social functions — to get a sense of what fanfic is good at rather than just work within a hierarchical view of good/bad fiction (created by critics and academics, ahem).

Second, their work offers some interesting insights into what Fanfic is specifically doing differently from mainstream publishing, which as we’ve shown in a previous lab pamphlet is ridiculously hetero-normative (i.e. straight). Not only does fanfic talk a lot more about sex (surprise!), but it also focuses considerably more on intimacy and feeling between characters. Fanfic is much more strongly character-driven and when we do an analysis of “event types” (the kinds of things that happen in fiction and who is involved) we see how fanfic is highly defined by events associated with physical and emotional interactions between people (rather than things — mainstream publishing is surprisingly artifact-obsessed…). In other words, fanfic isn’t all about sex. It’s about connection.

We hope our work can help support the critical re-evaluation of fanfiction and move away from old-fashioned aesthetic hierarchies (this is a great book!). Instead we want to push people to embrace more nuanced understandings of what different kinds of fiction can do for different kinds of people.

We think the data-driven tools we use here can be useful to support, amplify, and validate what fans already know — and what they love about fanfiction.